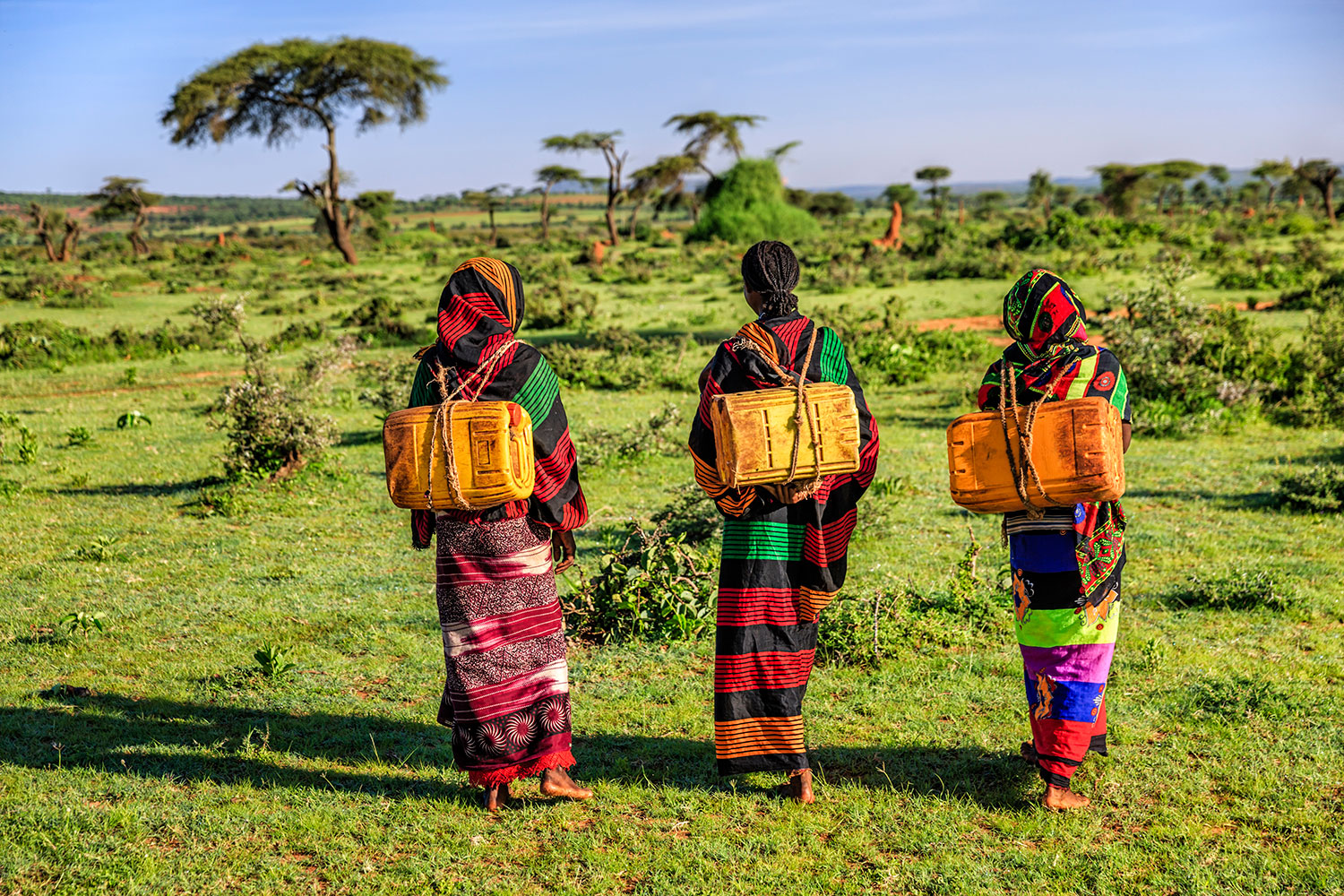 This was written after a visit to South Africa in 2004. Listen to Jan reading These Women.

I want to tell you the story of three women I met in South Africa. I’ll call them Lesedi, Rethabile and Amahle. I wish I could tell you that I’m doing this to preserve their anonymity. I wish I could say that. But I only ever knew one of their names, that of the teacher, ‘Amahle’, and even her real name has faded from me. Yet, they are as alive in my memory as my own children. They each told me their story in the only way they could. One with her eyes, one through her large, swollen hands and the other in her considered, educated, reflective words.

Stories are written on our faces, in the way we walk and lean and in how we breathe. These women, these women, have lived lives whose stories could only be told in the way they were told. They could neither fully tell, nor completely hide them. None of us can.

I’ll call her Lesedi, more so you don’t think of me as uncaring, so that she is not lost without a name. But the truth is that in my head she is ‘giraffe girl’. Her trade was making and hawking bead giraffes. I saw her the moment I stepped out of the ‘Cultural Heritage’ village in Kwa Zulu Natal. Like all reenactments, it was full of charm and romantic cosy
living, like something out of a life-style magazine, whatever that word means. Each of the huts smelled of fresh reeds and pristine daub walls. We even ate lunch in one, big enough to hold about twenty of us. They served salad and meat, prepared in a stainless-steel kitchen.

Over the compound fence I could see a shanty village stretching way down the hill-side and into the dust-laden bush; huts with tin roofs and no running water. She was one of about ten girls, each in their early teens with a little plastic table set in front of her. They were selling their home-made animals brought to life by tiny, brightly-coloured beads.  Only a child’s hand could manipulate such small beads, thread them on nylon cord and fashion them into trinkets. Experienced salesmen, they knew they had a small window in which to pitch their wares. They pounced on our party the moment we left the tourist centre. A mix of childish excitement and urgency, pleading almost.

‘Missus come see my giraffes’ said the girl with the long, long, skinny legs. Legs that in another life might have won marathon races. She slow-blinked at me. Eyelashes so thick and long, that if I hadn’t known better, might have been advertising mascara. Skin crystal clear, glistening with heat. To describe her eyes as chocolate pools would be a cliché. So, what can I say? Her eyes were large and brown and held in their wet shine a whole twelve years. Giraffe girl’s eyes had hooked into me the moment I entered the  compound. Her long, long neck did that thing that giraffes do, twisting in a rotation like a chamois-cloth being wrung out. Her neck was her ally, it allowed her to see and be seen when others may not want her to.

‘Is that your father?’ I asked, doubtful, glancing at the man behind her.

‘How much?’ I say. Picking up a blue, red and yellow one.

There was never a moment’s doubt that I would be leaving with a giraffe that day. I can’t remember how much she said. I do remember thinking I can’t haggle. I glance at her ’father’, he looks straight through me. I look at the two other men standing behind the rest of the girls. Was I being overly suspicious? Was I seeing something that wasn’t there at all? I smile at giraffe girl and offer her a note. She beams and slow-blinks. She wraps the giraffe in a soft, crumpled piece of newspaper. ‘Thank you.’ I say, ‘I will treasure this and think of you’. And I do. The little wobbly giraffe stands on the shelf in front of my poetry books to this day. I think about giraffe girl, now a woman, from time to time and I wonder.

It was quite a trek into the bush from Durban, the silver coach with its plush seats seemed incongruous, rumbling through the pitted tracks of Kwa Zulu Natal.

We were headed out to a remote bush school. The coach moved slowly, I’m sure the driver was trying to protect the coach’s suspension, but he also needed to avoid the dozens of children trundling down the hillsides, onto the heat-hazed dirt track road, headed to the school.

I didn’t realise as we drove that they were running to the school we had been invited to. We drove on and on for maybe forty minutes. These children must have walked and run for several hours, albeit downhill, to get to school. The climb home in the afternoon-sun must have been terrible.

We arrived at the school. There was no-one to greet us. We hesitantly made our way into classrooms, there were no adults about at all. Just one woman in an outhouse tending a fire. Several buckets with scum floating on the top stood behind her. Hundreds of children were running around in the dirt, kicking about old cartons and cans. Girls singing and clapping and getting us to join in. A few children could speak about English and chatted about their lives. An hour or more passed with no adult in sight. Finally, an older man entered the compound, he started mending the fence.

‘Hello’, I say ‘Do you know where the headteacher or any of the teachers are?’

‘Dey at funeral’. ‘Dey must be respect’ he added quickly as if pre-empting the questions in my head.

I wandered back to the outhouse. The woman was still there, of uncertain age but probably much younger than I took her for. Her ochre cotton dress grazed the earth floor as she bent. Bare feet, solid, secure. I had seen very few large women outside of affluent areas, but she stood as large and round and hot as the vast pot she was stirring. Please don’t think me critical. I am not. I am in awe of this woman.

I could see now that the pot was full of beans and peas that had soaked overnight. She must have set the fire before dawn.

‘What time do the children have lunch’? I asked.

‘Childer need beans at 10’, she replied without looking away from the pot.

‘Dey hungra’ den’. Dismissing my question with contempt. She was right. What did I know?

‘You didn’t go to the funeral?’

‘Childer need beans at 10, dey hungra den’ And they were. Each child brought their own tatty plastic bowl and spoon or bit of stick, sat on the dirt and ate their beans.

‘No drugs, No knives, No guns’

It was hard to put preconceptions aside, entering a school with this sign outside. And yet we were wrong; we’d arrived a bit early and there were teenage lads in immaculate uniform, barefoot, brushing the paths and hoeing the bright flower borders. After the formal introductions we were shown into Amahle’s classroom. Young, slim with an elegant shaven head she commanded respect. Ninety black teenagers rose from their desks, a most respectful welcome. A maths lesson was in progress, I went around talking to
the students. Surprised by the neatness, quality and difficulty of the algebra they were working on, I chatted with Amahle about teaching; she complained about class sizes, lack of time and resources – a teacher’s lament. She told me about teaching regarding HIV and AIDS. Every child she taught was either afflicted by it, or knew someone who was. She showed us the rest of the school and got some of the children to do their Michael Jackson routines. All the kids wanted to know if I knew David Beckham.

Our group was going to the local restaurant in Durban that night and I invited Amalhe to join us. It was for us an everyday kind of restaurant. Steak, burger, chips, the usual. Not really my kind of food, but it didn’t matter, it was good to sit with colleagues and chat about the field trip so far. I saw Amahle arrive, she looked anxious, ill at ease, wearing a wig, which she kept for church. I went out to greet her and escorted her in. She beamed at me, relieved. Walking in I saw what she saw - a room full of white people, laughing and chatting. Towards the end of the meal I noticed her making a parcel of meat from her plate, sliding it into her napkin and secreting it into her pocket. Walking out into
the town she invited me to her house the next evening, she gave me her address on a slip of paper.

I got a taxi there; the hotel had warned us not to go out without an escort. On arrival I passed complements on her apartment, (it was tiny and sparsely furnished, but so much better than the sea of tin shacks I saw all around the school). She told me it belonged to her Aunt, she’d borrowed it so she could return our hospitality. I was beginning to realise the impact of our visit on her life. She served us sitting on the floor; rice threaded with a little meat, perhaps from her napkin parcel, and okra.

She told me about her hopes for the future, she wanted to leave teaching and become a guide for tourists. She wanted to find a husband. I asked if she was worried about catching HIV? She said she wasn’t because she was ‘Umhlanga’. She caught my perplexed look, I had no idea what she was talking about.

‘You go to the stadium in Durban’,

‘Ah.’ I say still no clue what she was telling me ‘Just you?’

‘No all the girls. Many, many of us. We go in Zulu headdress, skirt and beads. It’s tradition.

‘You lie on your back and one of the older women inspects you. She declares you a virgin’.

Amahle tries to make me understand: ‘It shows that I have integrity, purity. I know I am clean and respectable. It makes me proud. It also keeps the bride price high for my family. My church elders know I am pure.’

In disbelief and puzzled, I ask if there was a similar inspection of boys. Now it was her turn to be shocked and amused. She laughed and without any sense of irony or logic she said;

‘The men believe they can cure themselves of HIV by having sex with a virgin’.

I spent my final day in South Africa in Amahle’s classroom. A school full of teenage Zulu girls, all undergoing Umhlangha, all hoping to make themselves a brighter future.